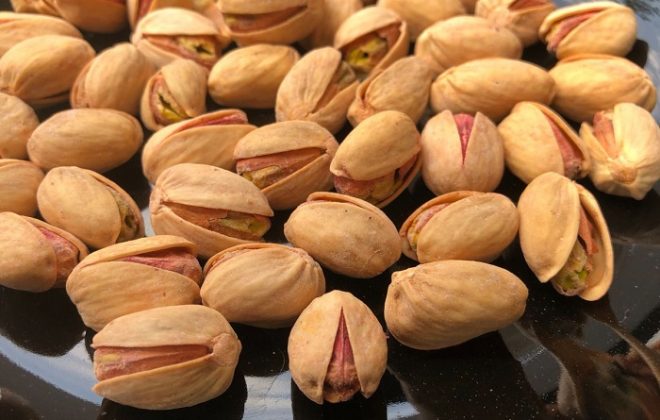 All you need to know about Iranian pistachio

Pistachios are among the most popular and healthy nuts in the world. Origins of pistachio dates back to 9000 years ago. In the beginning, pistachio was cultivated mainly in the Middle East and northern Africa. Later other countries in southern Europe and northern America started to participate in this global market. Iranian pistachio are among the tastiest and healthiest nuts with a wide range of applications in the food and pastry industry.

Nowadays, many countries around the world are participating in the global production and trading market of pistachio. Among all the countries in this market, Iran and the USA are the primary producers. In addition to these two leading countries, Syria, Turkey, Greece are other important countries that produce different types of pistachios.

The variety of Iranian pistachio is more diverse than the products of any other countries in the global market. Forty percent of Iranian pistachio cultivar consists of Fandoughi pistachio: a small roundish pistachio that comes with a great taste. Thanks to its small size, customers find it an economical choice, which is the main reason for its popularity. Twenty percent of Iran’s annual production consists of Kale Ghouchi, and 15 percent of it is made up of Akbari pistachio. Ahmad Aghaei makes up the other 12 percent of Iran’s annual production and export. All the last three types mentioned above have an elongated shape and are usually referred to as long pistachio. Each cultivar mentioned above is unique in terms of taste and shape. However, the success factors of Iranian pistachio does not end up in their taste and shape.

Grandornuts is one of the biggest Pistachio exporter in the world.

Iran is a huge country with a dry and hot climate in its central parts. Such environmental conditions are the best for pistachio cultivation. Since the geographical conditions of Kerman province are more compatible with characteristics of pistachio trees, this province is known as the primary producer of different types of Iranian pistachio in the world. Kerman pistachio is a well-known type of pistachio for foreign customers. Rafsanjan has gained a lot of reputation due to its vast annual production and contribution to the global pistachio trading market. Iran has more than ten different types of pistachio, each of which are different in terms of taste, size, and overall shape. The variety of distinctive characteristics of Iranian pistachios makes them unique and accessible among other countries and pistachio types.

Cultivation and production of Pistachio in Iran

It is believed that the very first pistachio tree was initially cultivated in Iran. The best parts for growing pistachio are sunny cities with low to zero humidity, semi-dry climate, and high-quality soil. These lands should have hot, long, and dry summers (with a maximum temperature of 50 centigrade) and moderate cold weather in winters (with the temperature above -10 centigrade). Some types of Iranian pistachio are particularly sensitive to cold weather in spring or their flowering time, such as Jumbo Pistachio.

In suitable conditions, pistachio trees can live for more than 100 years. However, aging can affect the productivity and growth of some types of Iranian pistachio, such as Jumbo Kalleh Ghouchi Pistachio. The first round of pistachio production takes around seven years after first planting. The maximum productivity of the tree will be reached after 15 years.

In late March, pistachio trees bloom. In the middle of May, pistachio nuts are developed on the branches, and by the beginning of August, one can witness the rapid expansion of seeds. One month later and while around 60 percent of nuts are naturally opened, harvesting takes place. September and October are the usual times for pistachio harvesting. However, harvesting cannot happen later in the hope of having more open shell nuts due to the risk of aflatoxin contamination.

Grandornuts is on of the biggest iranian dried fruits exporter in the world.

After harvesting, hard shells are separated and washed carefully. Picked nuts will be dried under the sunlight for about ten days. The next step involved the separation of closed and open shells. Naturally, open-shell pistachios have higher value while closed-shell ones are, on average, cheaper. Closed shell pistachios will be opened later using mechanical tools and techniques.

After separation, pistachio nuts will be sorted based on their shape, color, and quality.

Closed shells are usually used for producing pistachio kernels or double peeled kernels. Food and pastry industries are the primary consumers of pistachio kernels. Sorted pistachios will be further packed, roasted, and delivered to customers. They can be used either as a snack or in mixture with other nuts. The latter is a favorite snack for Iranians during their cultural events.